The undo/redo feature test is used to test the undo/redo system in an automated way, reducing the regressions introduced by new changes.

The way this is done is by reproducing critical test cases with a set of python scripts. The state of the objects involved in the test will be compared before and after these tests to make sure they are correct.

In the current implementation this means that the serialized state of an object before and after a single test must be the same.

The serialization of objects is carried out automatically and their state is saved in an .xml file structured like the following:

This is a group with one brush object as a child.

Each <> represents a node; <Object> is a node tag, the rest of the key-data pairs inside a node are the Node Attributes.

The undo system supports many different kinds of undos such as undo group detach/attach, prefab extract all, etc, with different setup conditions. For this reason, the actions that are required to set up and execute a single test and its components are exposed via python scripts. This way it is possible to expose editor actions via a flexible and simple scripting language and test Sandbox python APIs at the same time.

A script is composed of the following elements:

The testing system executes all .py scripts found in the Test folder the following way:

All Phyton scripts can be placed in the folder <Engine installation directory>/Editor/Scripts/Test.

A test named Editor/PythonTestUndoRedo on the Test Runner can be used to execute all the tests in this folder. 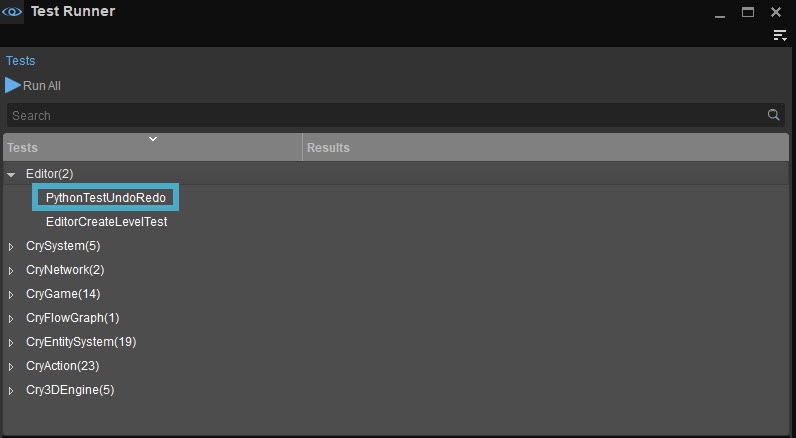 Following is a commented test script example that attaches an object to a group, undoes this and checks if both actions have been performed successfully.

This example can be used as a reference when a custom test is being created: